Saturn and the Horoscope of Evangeline Adams

The following is a re-post (with minor updates) from my soon-extinct blog Jude's Threshold which shuts down on or by October 12, 2016. And since there are conflicts concerning accurate birth data of the famous yet cagey astrologer, you may wish to check out two versions of her natal chart at astrodatabank. 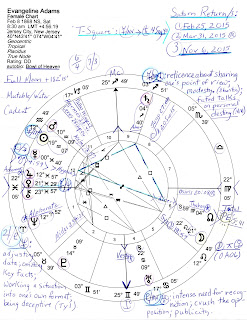 Although the accuracy of the birth data of famed American astrologer Evangeline Smith Adams of the Massachusetts Adams family is in question with a Rodden Rating of DD for ‘Dirty Data’ it is the data she herself gave in her memoir The Bowl of Heaven, a book used by many astrologers through the years to study her techniques. "We are all children of the stars," she wrote and nowadays Science has finally caught up with her.

And since one of the books I am currently reading is Foreseeing the Future: Evangeline Adams and Astrology in America by Karen Christino, I naturally wanted another look at her natal chart and I noticed that Evangeline Adams has recently (and unbeknownst to her) had a Saturn Return. And with Saturn being the traditional ruler of the ancient art of Astrology, I am posting her chart as a tribute to her pioneering work of the 19th century when she reportedly served a client list of 100,000.

Through her astrological and counseling skills, Adams established herself in NYC as an independent and successful woman of business in an era when that sort of thing was rarely done and usually frowned upon.

Yet these days, even non-astrologers have heard the tale of perhaps her most famous client (and student), financier J. P. Morgan, and his revealing remark that, “Millionaires don’t use Astrology, billionaires do.” One might assume that this remains the case since both Financial Markets and Astrology are based on cycles within cycles so why not pay heed to the excellent timing advantage one has through the use of astrological principles? And of course, timing and time are in the realms of astrological Saturn and the planet's 28 to 30 year orbit.

Well, this post is not meant to be a major study of the natal chart of Ms. Adams though more info may be published later. But let’s do make note of the three dates of her recent Saturn Return/s, a ‘three-fer’ due to Saturn’s retrogradation though her natal Saturn @4Sag40 is Direct as you see in her chart and this emphasizes the first, but especially the third and final conjunction of transiting Saturn to natal degree (4Sag40); (1. denial; 2. acceptance; 3. resolution):

Of interest as well may be the Sabian Symbol for her natal Saturn's degree: '5 Sagittarius' = "A Wise Old Owl Up in a Tree" with its positive expression: "exceptional wisdom or effective self-restraint in each detail of personal accomplishment." (Jones). And quite appropriately, 'wisdom' and 'restraint' are both Saturnian words.

Mercury, Another Planet of Astrology

Now Adams' Mercury-North Node opposition is a Mercury-South Node conjunction (ideas before their time; others pilfer and use her ideas and work without giving her credit--Hillary Clinton was born with the same configuration!) which suggests that her Astrology talent may have been inherited. The Mercurial opposition points toward Adams' natal Saturn in the 9th house of Philosophy, Religion, Higher Education, and Foreign Lands. Legal Matters may also be found in the 9th house especially involving Higher Courts and I'm certain you know and appreciate that the lady herself was put on trial in New York as a 'fortune teller' but by demonstrating in court her well practiced astrological skills, she and Astrology prevailed, much to the benefit of subsequent practitioners.

As the ruler of Capricorn (government, law, and business), Saturn is one of the karmic planets acting as our celestial time keeper and lesson bringer who demands that what is sown will be reaped. (As a Saturnian astrologer I don’t ‘do’ past lives, just heredity and DNA). No one escapes this natural law--not even big bankers, Wall Street gentry, or government officials (with warmongers and mass murderers definitely included.)

So! Did the 2015 Saturn Return of Evangeline Adams affect worldly events (beyond this post!) in a karmic way? Perhaps, perhaps not. But with her natal horoscope and 2015 Saturn Return dates noted and spotlighted, it may be worth a moment of wondering if the work of the famous 19th century reader of cycles is somehow imprinted upon modern events once again by the woman responsible for promoting Astrology into the mainstream and out of the gypsy's wagon.