Of Critical Degrees and the Progressed Moon 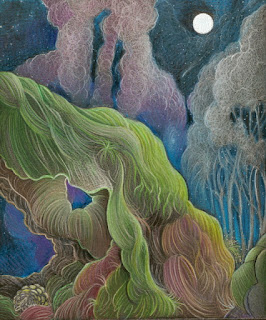 March 17, 2019: The following is a re-print from a 2014 Stars Over Washington post, here with minimal edits for the sake of clarity:

Beginning with its natal position in the Zodiac, the progressed Moon symbolically advances approximately one degree per month. Therefore, the Secondary Progressed (SP) Moon makes a handy timer for the natal and progressed horoscopes with the SP Moon influencing a particular degree for about one month's duration. If important transits or other progressions conjoin the SP Moon's position at any given time, a fuller picture is created especially when clues are considered such as the natal house through which the SP Moon advances, the SP Moon's sign, the condition of the natal Moon, the pertinent houses ruled by the Moon, and the houses ruled by the planet/s that are being aspected.

Is your SP Moon in Cancer? Then home and domestic scene are areas of focus for the two-and-a-half years SP Moon is in that sign along with possible mother/daughter/family concerns, nurturing issues, and real estate matters such as moving residence, renovation of your environment, a family member entering or leaving the home, or possibly some form of publicity or public contact. SP Moon in Leo may involve solar issues of creativity, entertainment/performing, children, romance, ego, pride, drama, teaching, the law, the hero's journey in life, and other Leonine matters while SP Moon in Virgo hints at Virgoan issues such as health, work, service, criticism, teaching, purification, dedication, simplicity, and/or discrimination. Naturally, in Astrology the opposite sign and house polarity must be kept in as well. (Ex: 4th house domestic matters tie in with or somehow affect 10th house career matters.)

A example from December 24, 2008 in Political Astrology is America's SP Full Moon @4Vir10 (We the People at critical degree--with SP Sun (leadership) @4Pis10; the SP Full Moon horoscope may be viewed at Jude's Threshold if you wish. This culmination phase in progressions tallied with the Financial Crash of 2008 and on an evolutionary scale marked the limit of America's thrust into the wider world (as our National Treasury was raided). With the public's SP Moon in Virgo, we were critical and suspicious (with good reason) of US leaders who were murky and deliberately confusing on all issues even to the point of deception (SP Sun in murky Pisces as it still is in 2019 with transit Neptune 'chasing' and obscuring it--jc).

For as you know, Pisces folk have that swim-up-or-down vibe which can express either positively (compassion, spirituality, creativity) or negatively such as theft and fraud, secrecy, scandal, or loss--which is what we got from leadership then as now with SP Sun in Pisces (Donald Trump, grifter and Jupiter-Neptune grand schemer; America's SP Moon as I type is @14Pis25, transit Neptune 16Pisces34).

Another Luna-related post is Using the Moon in Electional Astrology which concerns using the transiting Moon as a timer for starting or debuting projects or events--and not necessarily for political purposes.

Basically, a critical degree has been sensitized and indicates emphasis or stress on the planet/s or point/s and the issues involved. There may be a deal-with-this-Now crisis occurring as matters come to a head as timed by the SP Moon. (Mars is a traditional timer as well but here we're discussing the Moon--and much of the sensitivity of the degrees is due to the degrees of Mansions of the Moon which are not discussed here.)

Now critical degrees may not 'work' all the time and their expression is certainly affected by whether there's a transit to that point or another progressed planet joining in by conjunction or opposition. In such cases, the crisis or critical condition may last longer with other planetary involvement but as stated, if it's the SP Moon conjoining a critical degree, approximately one month will be the duration of the strongest influence.

Another consideration is the Modality of the affected sign: Cardinal signs tend to work faster and more directly, Fixed signs denote a lagging or delayed affect, and Mutable signs indicate more of a mental or internal influence, plus, fluctuation may be an issue with Mutable signs involved.

Using the SP Moon in chart interpretation and synthesis is an important tool in the astrologer's kit particularly if the SP Moon triggers a critical degree (which also may hold a fixed star) and so I do hope this post may be of some use to you.