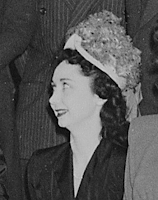 As a young but avid TV viewer in the mid-1950s onward, I remember reporter and TV show panelist Dorothy Kilgallen but it was only years later that I discovered her death had been ruled a suicide from a mixture of alcohol and barbituates. Looking back on the 1960s at this late date, the circumstances of Miss Kilgallen's demise seem suspect due to the criminal cases she reported on including the assassination of John F. Kennedy, who was her friend.

Now for the curious, a view of her natal horoscope is available but with no known birth hour (noon is shown), plus, a rectified hour of 9:18 pm CST (by Starkman) is noted (ASC 15AQ59; MC 5Sag18).

Born in Chicago, Illinois on July 3, 1913, Dorothy Kilgallen's natal Sun (11Can10 at noon with ASC 10Lib35; MC 12Can25 which positions her natal Jupiter Rx at IC) was paired by either a Gemini Moon or a Cancer Moon. Now Gemini, sign of the writer, seems appropriate to me yet both the noon and 9:18 pm horoscopes show natal Moon in its own sign of Cancer.

And if born during a Balsamic lunar phase (just prior to a New Moon), Miss Kilgallen may have been something of a prophet which would resonate with her Prenatal Solar Eclipse Saros Series ('PE') in Aries--in 1913 the 5 North, which gifts its natives with prophetic insights, correct hunches which may be reliably acted upon, and flashes of intuition. A useful talent for an intrepid reporter and journalist but one which may very well have contributed to the tragic death of The Reporter who Knew Too Much. Additionally, people born under the influence of an Aries solar eclipse are not easily intimidated and tend to confront issues and people directly and fearlessly. Unfortunately, for a lady delving into the activities of organized crime figures and/or other criminals (ex: assassins), such courage may lead to unintended consequences.

For on the afternoon of November 8, 1965, the day the lady's remains were discovered in her Manhattan condominium, the Moon in Taurus conjoined her natal Mars (12Tau07) and her natal Nemesis (12Tau04). As you know, malevolent Mars-Nemesis is a dangerous combination of energies and on that day perhaps the Moon acted as a timing agent (3:42 pm est NYC with her natal Jupiter Rx at MC, often an angular factor in death horoscopes--although she must have died at some earlier point). Plus, Taurus rules the throat and can signify the ceasing of one's voice in a death chart. Significant? My suspicion is that it very well may be, yet without accurate birth and death hours to go on, that's all I can say about her Mars-Nemesis combination at the present moment.

However, at least one book written about Dorothy Kilgallen reveals that she was found "in the morning" so in my files I have included a horoscope for November 8, 1965 at 9:24:42 am est NYC--only because this moment is "in the morning" and places her noon birth chart's Ascendant (ASC = physical body) @10Lib35:27 at Midheaven ('MC'), the most visible point in any horoscope. Of course, this hour creates yet another speculative horoscope to work with, however, I recommend the chart to you if you're interested in this particular tragic event whether an 'accidental overdose' or not.

In closing, I'll add that the PE prior to her death perfected on May 30, 1965 @9Gem13 in the 3 North Saros Series with themes of 'news that transforms a situation and causes worry or obsession' (paraphrasing Brady's Predictive Astrology). Sounds about right for a very curious lady communicator during the crime-laden 1960s who was known to be a bulldog-with-a-bone type of newspaper reporter. The daughter of a reporter, Miss Kilgallen would not let go of a story and may have discovered new information concerning one of the crimes she was investigating for a book she intended to write. Needless to say, the book did not get written.

And so if you, dear reader, are aware of any details concerning this tragic matter which some would call a 'cold case', or have studied the horoscopes yourself, please let me know your thoughts either in an on-topic comment with this post, or at my contact address judecowell at gmail dot com.

Naturally, confidentiality is assured and remember - your Shares of my posts are always much appreciated! jc

Update March 1, 2020: here's a PDF of a recent letter from author and Kilgallen advocate Mark Shaw on the topic of opening the Kilgallen murder case--not re-opening the case because there wasn't one when there should have been. I hope you can open the document and read it. jc

Dorothy Kilgallen's Tell-All on a Mafia Don Might Have Got Her killed which concerns the book she was planning to publish with new info on the assassination of JFK. She was not fooled by the Warren Commission Report, a whitewash.

She was the only reporter to have interviewed Jack Ruby, assassin of Lee Harvey Oswald. And on the morning of her death, the FBI arrived at her apartment and commandeered all her notes as ordered by FBI chief J. Edgar Hoover. Dorothy Kilgallen was found that morning by her hairdresser and maid, sitting up in bed wearing a robe with nothing underneath (she always wore pajamas to bed) in a bedroom where she never slept.

February 26, 2020: here's more info on Dorothy Kilgallen and the "Out-Of-Towner" man, journalist Ron Pataky whom she suspected of being a CIA agent (he may have told her he was) with ties to Clare Booth Luce:

The astro-investigation continues. Another post will be required and I hope to write it asap. jc

ps: the Moon-Mars-Nemesis conjunction on the afternoon of November 8, 1965 times closely to when authorities were called and/or arrived at her apartment. '12Taurus+' a significant degree. jc