On the Horoscope of Georges Seurat

If you read the Wiki bio page of painter Georges-Pierre Seurat, it won't take you long because tragically, the father of pointillism passed away from disease at the young age of 31. Seurat (December 2, 1859--March 29, 1891, Paris, France in both cases) lost his son from the same malady about two weeks later and in the ensuing years, various diseases have been proposed as cause of death. Suffice to say, the 1800s were replete with many diseases, unsanitary conditions, and often ineffectual "cures," and there's no telling what new, creative techniques Seurat the painter would have devised had he lived a full life. This makes me sad to think about it (he and I share a Pisces Moon!) and yet I am quite curious to learn about his natal planets.

For during his brief 31 years, Seurat did manage to waft, dot and dash Impressionism into Neo-Impressionism and we have his "A Sunday Afternoon on the Island of La Grande Jatte" (1884--1886) to forever signify the shift. 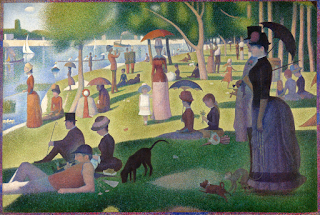 Fortunately, accurate birth data for pointillist Seurat is available, collected by Michel Gauquelin (!) so if you wish to ponder the Natal Horoscope of Georges-Pierre Seurat, be my guest. You'll find his natal Ascendant (physical body) in Virgo, sign of health, and his planets with a blend of Jupiter-ruled Sagittarius and a dash or two of creative, yet infection-prone, Pisces, also ruled by expansive Jupiter with the higher octave inspiration and creativity of Neptune swirling in the air!

Actually, for art talent, Geoges Seurat was born under the influence of a Venus-Neptune square which suggests a propensity to enter relationships suddenly with disastrous results, but is very creative an aspect to have for an artist who doesn't mind putting in the work (square). Plus, artful Venus also conjuncted his Mercury which suggests the beauty and pleasantness found in his paintings.

Personality-wise, Seurat's steamy Fire-Water Sun Sag-Moon Pisces blend suggests an emotional visionary with deep convictions, but one who could be careless, self-indulgent, and rather lazy at times. As with most artists, spending regular periods alone with his art was an imperative for him, plus, great sensitivity to the human condition is indicated by this blend.

Humorous, generous and forgiving, Seurat was a romantic - open to adventure, at least in his own imagination, and at his best he could sort out the real from the unreal. And yet he could also have been gullible (especially in love), moralistic, and somewhat unstable emotionally. Well, perhaps his Sun Sag-Moon Pisces blend's 'Image for Integration' (of conscious + unconscious energies) offered by the Harveys in their book, Sun Sign-Moon Sign, might inform us:

And when Seurat passed away on March 29, 1891 (hour unknown), transiting heavyweights Neptune and Pluto in early Gemini were conjunct his natal Uranus Rx @5Gem33 and were thus in process of opposing his natal Sun @9Sag21 (vitality), which activated Seurat's natal Sun-Uranus opposition of restlessness and erratic behavior. Biologically, 'Sun-Uranus' = "heart neurosis" - Ebertin, who gives the biological correspondences for the 'Neptune-Pluto' pair as: "The treacherously painless stage of disease; lack of incentive to maintain health; disturbances or troubles of slow or lingering development." Now these are not definitive causes of Seurat's demise, of course, but they do present possibilities. Add his natal Uranus to the pair and we have "hyper-sensitive nerves" and a possibility of "peculiar discoveries."

Include Seurat's Sun with Neptune-Pluto and it's "peculiar diseases as a consequence of oveindulgence in alcohol, nicotine, medication"; and/or "succumbing to strange influences."