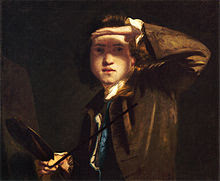 In the 18th century, portrait painter Joshua Reynolds was a big deal. Known as the primary promoter of the Grand Style in painting, Reynolds was born on July 16, 1723, founded and was first president of the Royal Academy of Art, and was knighted by George III in 1769. So that's Sir Joshua Reynolds to you and me!

Now other posts have been published here and there concerning the Astrology of Famous Artists. Two such are Edouard Manet and Paul Cezanne. And even though I know of no birth hour for Joshua Reynolds there are still a few details concerning the gregarious fellow that can be ascertained from his natal planets.

For on July 16, 1723 in Plympton, Devonshire, England the Sun was in Moon-ruled Cancer while the Moon floated through the late degrees of Jupiter-ruled Sagittarius and on into Saturn-ruled Capricorn as the morning proceeded.

Checking both Sun Cancer-Moon Sag and Sun Cancer-Moon Cap personality blends, I find myself leaning toward Moon in Sagittarius (gregariousness!). For one thing, a Capricorn Moon - ambitious for advancement to be sure - gives a blend shared by hard-hitting author Ernest Hemingway while a natal Sun Cancer-Moon Sag blend is shared by landscape artist Jean-Baptiste-Camille Carot! If you wish, check out a previous Astrology post on Camille Corot here.

Now because Joshua Reynolds was something of a workaholic, a Capricorn Moon is certainly a possibility yet with his Saturn (planet of work and concentration) in late Sagittarius, a Sag Moon would conjunct natal Saturn during the early morning hours of his day of birth so that a Moon-Saturn conjunction suggests a similar influence as a Capricorn Moon. And actually, a mutable (changeable) Sag Moon could also be more descriptive of how his assistants painted the outfits his subjects wore suggesting that perhaps Joshua got a little bored before his portraits were completed and wandered off, perhaps for a new adventure!

Even so, we know his Jupiter Rx in Capricorn conjoins one of the four Cardinal World Points of Fame and Recognition (@00Capricorn) which makes me think that perhaps worldly benefits were not too difficult for Reynolds to attain, consistent worker or no. Especially considering the Reynolds family's social status, plus, his early expression of obvious art talent so that even his father, who had wanted Joshua to go into medicine, soon conceded to his son's favored career ambitions.

As an artist since childhood myself, I believe that art talent should always be encouraged not squelched, don't you?

As for further indications of art ability and interest in Reynolds' natal chart, one indication we can look to is a pleasant sextile between his Mercury (which relates to the mind but also to hands and dexterity) and art-loving and inspiring Neptune. This is a very creative combination with a deep well of inspiration and with idealistic Neptune involved, his Grand Spirit style that promoted painting "the idealization of the imperfect" makes sense. Additionally, a Mercury-Neptune sextile suggests spiritual or mystical tendencies, and a deep love of beauty.

Now let's close with Joshua Reynolds' Prenatal Solar Eclipse Saros Series ('PE') and its themes that would have run in the background of his life and been activated (if or when conditions were right) approximately every 18.6 years. An accurate birth time isn't needed for this:

Born into the 14 North series which manifested as a Total Eclipse (the most influential kind) on June 3, 1723 @11Gem50, 14 North themes and potentials include: 'a peculiar turn of events; unrequited love; despair; unexpected happenings in finances; a draining of energy; possible illness; too much confusion and delusion to form clear judgments' (paraphrasing Brady's Predictive Astrology).

For a modern day example of such a confusing period of time we have only to look to the last occurrence of a 14 North Solar Eclipse on November 25, 2011 @2Sagittarius. This was during major financial woes in the US, if you remember, when politicians of both parties dramatically dashed back to Capitol Hill to engage in "sequestration" tactics and took the peculiar step of creating a so-called "Super Congress" to deal with budgetary issues.

And recently in my political astrology posts, I have related 14 North and its difficult influences to the current pandemic crisis via cosmic time links and the "sequestration" tactics and impositions we now endure. Yet what any of such 14 North themes could have meant in the life of Sir Joshua Reynolds I do not know unless a possible illness occurred for there were, of course, gracious plenty of them to contract in the 18th century - but on second thought, and considering his 'love of beauty' and what was perhaps his dreamy nature, it may have been 'unrequited love' that complicated his life!

Here's a SO'W link to a post which may be of interest to some:

The 'Covid Eclipse' and a Peculiar Turn of Events (14 North).