The Art and Astrology of Paul Cezanne

The natal horoscope of Paul Cezanne is rated AA for accuracy although my Solar Fire (v9+) software gives it only a B rating. Baby Paul was born January 19, 1839 at 1:00 pm LMT (probably a rounded-off time) in Aix en Provence, France with Sun 28Cap19, Moon 12Pis56, Ascendant 2Sco49, and Midheaven, the Career and Public Status Point, 10Leo16. As a decades-long fan of Impressionism and Cezanne's Post-Impressionism, many of his paintings have always topped my favorites list but it took the study of Astrology to clue me in that Cezanne and I share the same Earth-Water Sun Capricorn-Moon Pisces personality blend!

(I don't share his talent, of course, but some resonance on the personality level exists between this famous artist born in 1839 and yours truly born one-hundred-ten years later, not a rare astrological circumstance at all. And yet I do like drawing on black paper because of its 'mysterious' feeling and because it can add slight sculptural or 3D qualities to my efforts.)

Notably, one of the 'Images for Integration' for Sun Cap-Moon Pisces personalities: "Bathers in a Landscape by Cezanne" as mentioned by Charles and Suzi Harvey in their book Sun Sign-Moon Sign. 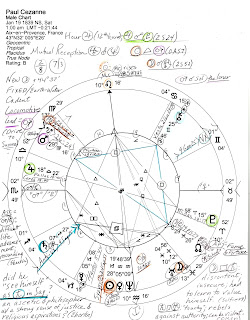 Please enlarge the image to read my scribbles of his basic chart factors plus a few I added that I thought were particularly revealing. One such is his Saturn @7Sag27 conjunct Anti-Vertex to which I added, lower left: did he "see himself" as Saturn in Sagittarius? Then there's chart-ruler Mars at a critical (impatient) 29th degree of Virgo so we see Mars, planet of energy, action, and motivation, struggling to reach 00Libra00, a Cardinal World Point of Fame, Fortune, and Recognition. I'd have to say Cezanne fulfilled that promise in a lasting way, wouldn't you? And we also see that Mars conjoins South Node, a "loner" signature, suitable for working in isolation which he is known to have done although working outside in nature also appealed.

Now one prominent feature of his chart and psyche is a powerful Jupiter-Pluto opposition which suggests persecution of a religious or philosophical nature. This may refer in part to the mockery he suffered for his painting style early on for it challenged the established methods of his day. And it wasn't until 1863 at age 24 (perhaps during a Jupiter Return in 'art sign' Libra?) that his first exhibition was accepted at the Salon des Refusee after the Paris Salon rejected his paintings which were accused of being incomplete (and too different, no doubt!) However, before long success began to follow thanks to the help of others who appreciated Cezanne's breakthrough style of work.

Yet both expansive Jupiter and wealthy manipulator Pluto relate to 'father' and authority figures in general, and therefore on some level to his successful businessman father. Plus, Mars opposing his North Node of the Moon (NN, a 'mother' indicator as well as 'future direction' and 'contact with the public') squares natal Chiron @25Gem46 Rx (the wound, the healer, the blind spot) in the 8th house of Shared Resources, Transformation, Sex, Death, and the Occult. Yet through transcending Chiron he lifted himself above family issues and complexes via excellent manual dexterity (Gemini) so that painting became a savior for him as evidenced by this post's opening quote. Besides, his Nodal axis falls across the Virgo-Pisces 'victim-savior' polarity suggesting the 'suffering mother' archetype which can infuse a child's psyche into adulthood.

So apparently Cezanne's animus function (Mars) and the feminine (North Node) may have blocked him on a very deep level--perhaps in the sexual arena (8th house) and/or via communication (Gemini) so that his thinking may have been on the skewed side regarding male-female relationships (but whose isn't?) After all, he and his sister, Marie, were both born out of wedlock as you see with the Sun-Venus-Neptune trio in 3rd house (Siblings) conjunct the IC (Home; Domestic Scene; Psychological Home; Roots) denoting such a family circumstance yet this trio also reveals great art talent (Venus and Neptune) which may have been inherited (IC). Art was the basis of his life after all.

Speedy little Mercury is also posited in 3rd house in structural Saturn-ruled Capricorn, a shout-out to his sculptural painting style. And note Cezanne's Moon-Uranus conjunction in creative Pisces (4th house), an aspect suggesting some measure of anti-social behavior (the loner!) but also an understanding of human nature and contact with all sorts of people. And according to Moon-Uranus, unusual and/or interesting women tended to enter his life, plus, an unconventional childhood is also a possibility (perhaps more than out-of-wedlock conveys). This conjunction also relates to potentials for an original imagination, sudden and peculiar mood changes, and crankiness especially if the conjunction is afflicted--which it is by the square from Saturn--papa! (See my notes penned on the chart, bottom right.) These chart factors suggest early troubles with Dad and with Mother and possibly a "cold heart" as one result (Oken).

Yet in spite of such problems which could have paralyzed him emotionally into few if any accomplishments, Paul Cezanne was born with a Sun-Mars trine hinting that he could muster his energies to reach his goals although the trine indicates that quite a bit of physical effort was required for best results from this ambitious, courageous aspect which provided him with prolonged endurance and physical strength. Of course, a competitive nature is also provided by a Sun-Mars trine and he probably possessed a strong sense of justice which supports his fair play Jupiter in Libra (who, like Mr. Trump, may often have asserted, "it's not fair!").

Also worthy of mention is the artist's Prenatal Solar Eclipse ('PE') @25Vir27 in the 2 South Saros Series (11th house of Groups and Associations). 2 South's theme is about 'joining unusual groups and feeling that you'll gain a great deal from them' (Brady). Is this a hint of a secret society membership? Well, curiously, a solar eclipse manifests in the 2 South series quite soon--on January 6, 2019 @15Capricorn! This eclipse will occur in Cezanne's 3rd house of Communications and it's possible that he or his work will appear in the news around that date, give or take a few weeks or into 2019. Perhaps through an art auction?

Anyway, a PE in Virgo relates to issues of perception, discrimination, and observation which actually tallies well with Cezanne's oriental planet, Mercury which is associated with a talent for detailed observation. This is a handy talent for a painter with its tendency to 'dot all the Is and cross all the Ts' (Tyl). However, a caution with PEs in Virgo is to avoid overdoing the tendency to criticize others for it interferes with karmic progress (Lineman). And of course, 'oriental' means that Mercury is the last planet in his chart to rise just prior to his Sun and seems to relate to one's work preferences.

(Personal note: Jupiter is oriental for me so I prefer spontaneity in the work environment, just so you know.)

Now as you may know, genius artist Paul Cezanne and writer Emile Zola (April 2, 1840 11:00 pm LMT Paris, France) first met during their school days. If you wish, read more about Zola, his natal Double-Fire Sun Aries-Moon Aries blend, and his mysterious death on September 29, 1902 in a previous JCAstro post. Included is a link to a History Today article concerning Emile Zola's death by fumes (culprit Neptune) and a view of Zola's AA-rated natal horoscope is also available.

And if you have 6 minutes to spare for a brilliant fellow's Art, I highly recommend the presentation Paul Cezanne: A 6 Minute Art History Video which includes a slideshow of his work.

Or for more details on Cezanne's art philosophy and architectural 'flat' painting style (he "constructed" pictures rather than "painting" them and his works created a 'bridge' between 18th and 19th century art styles, a signature of his Mars-NN = Chiron in Gemini as noted, above), try The Art Story website, and of course, a plethora of Cezanne's paintings may be found decorating the Cyber World!