A Natal Chart and a Neptune Return for Sherlock Holmes

The following article and horoscope previously appeared on Jude's Threshold:

A Neptune Return for Sherlock Holmes

If you enlarge the image of the natal horoscope of literary character Sherlock Holmes, with the ‘birth date’ based on first publication, you’ll see a few notes penned upon it including a midpoint picture (center) which describes why I chose ‘8:12 am GMT’ to time the chart. This is, of course, speculative, since a publication date rarely includes a particular hour. For astrologers this is inconvenient when setting up a ‘natal chart’ for a well beloved character so several methods of determining a ‘birth hour’ may be utilized.

As you can see, the midpoint picture of Neptune-Midheaven (Mc) = Sun (personality) reveals one who uses ‘physical disguises’, one of Mr. Holmes’s favorite ways to investigate by secretly spying on people when necessary. Of course, sunrise, noon, or other hours may be experimented with when sleuthing for the birth time of Sherlock Holmes but here I use 8:12 am GMT, January 6, 1854 (London, England, naturally) for the reason stated: 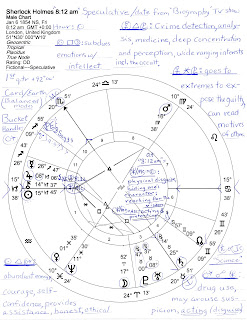 Oh, and did I mention that 8:12 am GMT in London on that date gives a sunrise (solar) horoscope? Such a solar chart relates to career and as we’ll find from the Sun Capricorn-Moon Aries personality blend of this very famous consulting detective, a materialistic view and an over emphasis on career matters are indicated by this Earth-Fire combination of energies, here with a Saturn-Mars influence. And in the many celluloid portrayals of his personal traits, emotionalism is not a strong suit, just as in Sir Arthur Conan Doyle’s stories. Objectivity, not subjectivity, is his goal in all things though more recent portrayals tend to soften him up a bit to be more pleasing to a modern audience. Still, his Sun Cap-Moon Aries blend identifies Sherlock as shrewd, obsessive, tenacious, courageous, and self-motivated; he’s an astute thinker with high standards and powerful leadership qualities. Insensitivity to others is shown via a brusque manner and an irritable moodiness when things don’t go his way–ask his favorite nemesis, Moriarty–Sherlock Holmes is a very sore loser!

Yet Mr. Holmes is honest and has a deep sense of responsibility along with a constant desire for excitement, for as you know, boredom and trivialities simply won’t do. Having Neptune in its own sign of Pisces figures into his use of drugs but 1 9 th century drug use is a little beyond the scope of this post. Actually my primary goal is to provide the dates of what is called a Neptune Return for, as you see, Sherlock’s natal Neptune at 1 1 Pisces 3 0 is basically the slow moving planet’s recent and current sign and degree in the Tropical Zodiac. Due to retrogradation, Neptune’s return to its 1854 degree of 1 1 Pisces 3 0 occurs five times, one of which has already occurred (and see the link, below, for the latest news on Season 4 which went into production Spring 2016 and will most likely air in January 2 0 1 7 or thereabouts).

Intriguingly, natal Neptune conjoins one of the sleuth’s natal asteroids and you’ll never guess which one...Nemesis!

The astrological keywords for Nemesis include ‘divine retribution’ and ‘the unbeatable foe’ and I suspect you agree that Doyle’s Moriarty character perfectly fits those descriptions. This causes me to wonder if Conan Doyle was aware of the Neptune-Nemesis synchronicity in early January 1854 especially since he dabbled in spiritualism and other esoteric subjects long studied by secret societies such as the Freemasons and Rosicrucians. At the least, I think he knew of the Fates and Nemesis as the Greek goddess of divine retribution since Greek Mythology was a hot topic in the 19th century, plus, destiny and karma (reaping what was sown) are Universal Laws near the heart of many Sherlock Holmes tales, are they not?

Here’s the theatrical Neptune of Sherlock Holmes returning for another bow:

Prominently, the July 3 0, 2 0 1 6 Neptune Return chart shows a major and exact transit to the character’s natal Sun (1 5 Cap 4 5) in the form of a visit from creepy Pluto, planet of power, transformation, mystery, hidden wealth, invisibility, crime, death, etc. Pluto-to-Sun denotes a time of intense self-awareness when a desire for recognition is uppermost and courageous actions are taken by those with the determination to do so. However, we may see Sherlock retreating even more than usual as he deepens his methods of investigation and makes some sort of new start, or takes things in a new direction. Fear may also be in the script with is considerable ego as a driving force, plus, ghosts from the past will weigh heavily upon his present actions, as noted in the update linked here:

Now there's a strong emphasis on Pluto (sleuthing, stalking, detecting, victimizing other people, etc) in the chart of this imaginary character although we must also tip our deerstalkers to natal Mars at 1 6 Virgo 3 8 as the handle of a Bucket planetary pattern (which would be labeled a Bowl were it not for its handle, Mars in scientifically minded Virgo, the sign of categorizing, organizing, tidiness, attention to details, and dedication to work. Discriminating Virgo with Mars, planet of motivation, action, and energy, describes Sherlock Holmes perfectly with his magnifying glass and microscope at-the-ready for detecting minute details of any mystery. And as Bucket handle, Mars in fussy Virgo is the main channel for his natal planets’ energies to express (confirmed bachelor as he is and devoted to finding the truth) and as the handle planet melds the two halves of his horoscope and psyche into a whole person (or, a whole character in Sherlock's case.)

His Mars-Neptune opposition is prominent and relates to his drug use and his ability to play roles by disguising himself, but also is influential in the way some characters tend to distrust Sherlock Holmes and think he’s a sham and not a ‘real detective’ at all! But let us continue....

Neptune-Nemesis, Pluto-to-Sun in Saturn-ruled Capricorn, and Mars in Virgo. Neglected so far is his Mercury in Sagittarius, sign of The Seeker. Mercury rules the thinking and reasoning processes and style of communication (and siblings such as Mycroft!) and in Sagittarius denotes the philosopher with manifold interests-–a deep thinker who strives for justice and truth (Ebertin), and is pre-occupied with problems, puzzles, and mysteries. Perhaps this chart’s Scorpio Midheaven isn’t far off since Scorpio loves a mystery, can be quite morbid, and Midheaven is the Goal Point of any chart. Solving mysteries fits Scorpio well yet oddly enough there are no planets in the sign though there are three in opposing Taurus so the 2/8 polarity is implicated.

Rising as you see are his Chiron in Capricorn conjoining natal Sun. Chiron is the blindspot but also The Key and/or the mentor in a chart and is often described as The Wounded Healer, or Christ consciousness. Does Sherlock play the role of the healer who needs healing himself? Does he come close to martyrdom during his life-and-death struggles, perhaps? I would say so though you may disagree if you wish. Coupled with natal Sun, Chiron denotes one for whom pride and power lie in ambush (Nolle) and through Chiron-Sun we see this unique character’s innate sense of destiny played out across Neptune’s Silver Screen as Sherlock burns with purpose within his (imaginary!) existence that, as noted previously, cannot be trivial but must be larger than life.

Nearby is Jupiter at 8 Cap 0 6, the planet of success. Jupiter precisely conjoins the Syzygy Moon (8 Cap 3 2), the last lunation (a New Moon) prior to January 6, 1854. The Saturnian sign with Jupiter there indicates that Sherlock relates to others as an authority (Capricorn) and of course we can all agree to that. A New Moon prior adds to the novel and unique quality of Doyle’s then-popular character of a ‘consulting detective’. (You know that 'Sherlock Holmes' was not Doyle's favorite invention--but it did add to his income. Additionally, the Pre-Natal Solar Eclipse of his birth date is the 18 South Saros Series which happens to be our current series with themes of separations, partings, and endings but with a possibility for positive outcomes (Brady). 18 South last manifested on March 9, 2 0 1 6 @1 8 Pis 5 5; the next Solar Eclipse = Sept 1, 2 0 1 6 @9 Virgo 2 1.

Sherlock’s Jupiter-Chiron brings in a crusader quality (knighthood--the capes and occasional evening dress) and possibly adds more secret society vibes to his chart as brother Mycroft sends him off on secret missions for Crown and country. Or tries to.

Meanwhile, Sherlock's North Node (future direction; destiny) in Mercury-ruled Gemini hints at the character’s many associations and contacts (ex: the street kids) and the seeking of stimulating ideas and new projects--though communication may remain on a superficial level with all but the chosen few. With a Gemini North Node he simply loathes being wrong as well which certainly you have noticed in many episodes and in versions of the stories w lead actors playing his nibs.

Then there is lady Venus, planet of the attraction principle, love, beauty, diplomacy, and relationships, in very early Pisces, the sign of her exaltation. Since Sherlock tends to prefer freedom to union, we may assume that his love of music and the violin is described here with his Sun-Moon personality (yes, the Moon remained in Aries the entire 24-hour day) already noted for an avoidance of the emotionalism that Venusian romance would require. Also note that the agent ‘Irene Adler’ character--The Woman, as he called her-–may be indicated by Venus in Pisces, a sign of mystery and subterfuge. Plus, the condition of loving a woman who is elsewhere, be it in death or otherwise, can be enough to satisfy an ethereal Venus in mystical Pisces.

Now as you see, there is quite a lot of Taurus the Bull in the chart viaSaturn Rx, Uranus Rx, and Pluto Rx. Suffice to say that a tendency toward materialism is supported here though eccentric Uranus in Taurus adds a flair for taking risks and a resourcefulness in seeking out finances. A certain inertia may be noticed with Saturn in stubborn, sometimes lazy or indolent Taurus while Pluto in this sign of wealth denotes one who is obsessed with gaining possessions in a way which may affect his destiny (Ebertin).

And yes, there are many other chart factors of note in this speculative natal horoscope for Sherlock Holmes but to mention them all would put you, dear reader, in serious danger of reading a rather verbose book rather than a WordPress article! So I’ll sign off by sending Good Wishes to cast and crew as fans such as myself await an exciting new season of Benedict Cumberbatch (Mars in Virgo) and Martin Freeman (Sun in Virgo) in their roles as Sherlock Holmes and Dr. Watson airing on Masterpiece Theater in 2 0 1 7 !

For Celebrity Horoscopes, bios, trailers, and classic movie clips you have a V.I.P. pass to visit Neptune's Silver Screen.