If you'd been there in a certain Lincoln Park garage the morning of February 14, 1929, say about 10:30 am, you could have witnessed the infamous Valentines Day Massacre. Chicago mobster Al Capone was and is assumed to have been the perpetrator against Bugs Moran, head of Chicago's North Side Gang, but Bugs had retreated from approaching the garage when he spied police officers entering the building. Yes, some of the culprits were only disguised as police officers (see Neptune, planet of disguises, in the chart, below) but Bugs Moran managed to escape Capone's machine guns that day by ducking into a coffee shop.

The natal horoscope of Alphonse Capone is quite interesting if you care to take a look. Born January 17, 1899 at 9:30 am est in Brooklyn, NY (King's County; RR: C), the 1929 Massacre's gun-toting Mars (@22Gem53 conjunct US natal Mars) conjoined Capone's natal Neptune suggesting a period when his physical efforts were undermined by deception and/or confusion - or, he missed his target--in this case, he missed killing Bugs Moran, the Prohibition gangster who first came up with the bright idea of drive-by shootings. (A 'bright' idea America could've done without.)

In addition, Al Capone's natal Saturn (19Sag27) conjoined the 8th cusp in the 1929 chart, and as you know the 8th is the house of Death. Then there's Al's natal Mars Rx @29Can16, a critical-crisis 29th degree, which conjoined the Massacre's 10:30 am IC of Endings and the Basis of the Matter. From these transits and other chart indicators too numerous to mention in a brief post, I'd say that suspecting that Al Capone was responsible for the murders makes more than a little sense. And under the influence of his Mars-Saturn personality blend, we know that this frustrated planetary pair contains destructive energies unless channeled into positive pursuits. Unfortunately, Alphonse did not use the energies positively.

So is it curious that disruptive, shocking Uranus @5Taurus conjuncts the 12th cusp of Karma and Self-Undoing at 10:30 am? This makes me wonder if at some point, someone involved in this heinous crime uttered the immortal words, they had it coming.

An Image of Crime Family Quarrels and Conflicts circa 1929 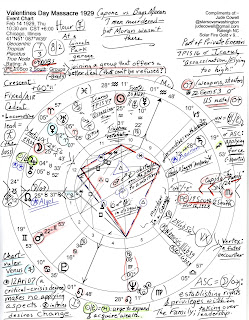 So as you see in the chart, vicious Algol of Medusa fame, star of rage and fury, rises with the karmic North Node, and karmic planet Saturn @28Sag12 in the 8th house leads a Locomotive shape of the planets which denotes a ruthless executive demanding success. Plus, a high-flying Kite pattern is evident with disguising Neptune at a critical-crisis degree - planet of deception, fraud, and lies, acts as the 'tail' of the Kite with the Sun (25AQ31) as its 'nose' - success (Kite) through tricks and deceit (Sun opposing Neptune). Plus, the Sun shines upon Tisiphone, asteroid of retaliation and although I don't know the full history of the Capone-Moran relationship, my suspicion is that the 1929 Massacre must have been part of an ongoing gang war for power and control--see Cupido ('The Family'; 'The Syndicate') conjunct South Node and Descendant; Sun-Pluto = Jupiter: urge to expand and acquire wealth, and successful striving for power; Moon-Mars = ASC: establishing rights or privileges within The Family, and taking over leadership; Uranus-Pluto = North Node: an immense task accomplished with others--Ebertin).

Also notable is chart-ruler Venus @12Ari07 but the planet of jealousy and revenge makes no applying Ptolemaic aspects in the chart so her sign (Mars-ruled Aries) and house (Behind-the-Scenes 12th) denote how things proceeded. My guess: revenge taken in a behind-the-scenes location with Venus at the critical-crisis degree of 12 Aries.

So there's Icarus @7Pis47, asteroid of assassination and/or of 'flying too high' which is karmically intercepted in the 11th house of Groups; meanwhile, in the 6th house of Work and Service (murders in a garage or warehouse, a mechanic working on a truck was killed, plus 6 more) the Massacre's PE (Prenatal Solar Eclipse Saros Series), the 2 South, indicates a theme of 'joining a new group that offers a better deal' (Brady).

And so my question has to be: was it an offer that couldn't be refused?