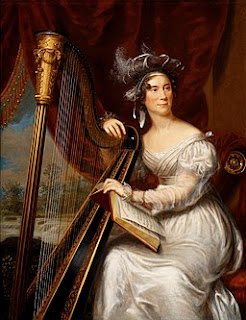 There she is, our quite neglected First Lady Louisa Catherine Adams (nee Johnson), spouse of President John Quincy Adams in the famous portrait by Charles Bird King. As you know, Louisa Johnson married John Quincy Adams, son of Founding Father John Adams, so rarefied social and political circles, both foreign and domestic, were her due. She served as First Lady while her husband was in office from March 4, 1825 until March 4, 1829, a one-term president. However, Mr. Adams served in other governmental positions including the US House of Representatives from 1830 to 1848.

Now one curious item in relation to Louisa is revealed in her own writings, via an entry for 9 February 1821, "One of the greatest taxes I have to pay is that of concealing that I am a travelled lady." This revelation opens the book A Travelled First Lady: Louisa Catherine Adams yet her troubled sentiment seems quite antiquated nowadays, doesn't it? Why would it matter? Well, Louisa was the first first lady born outside the US and with a US presidency involved, questions concerning the topic of a foreign first lady must have circulated around Washington DC as gossip, there, if nowhere else. She apparently considered Washington to be provincial, an attitude she may have shown in all the inconvenient places! And yet her salon was often full of very important guests. As a world traveler, she would naturally consider the young city of the 1800s to be provincial, perhaps even a 'backwater'.

So for fun, let's briefly examine a noon natal horoscope for First Lady Louisa Adams to check for any travel-related clues in the planetary department and we may stumble upon her known propensity toward illness, migraines, and fainting spells while we're at it.

Her birth hour unknown, below is the 'noon' natal horoscope of Louisa Catherine (Johnson) Adams set for February 12, 1775 NS London, England; please enlarge the chart if you entertain any hope of being able to read my scribbled study notes; the Moon remained in subjective Cancer for the 24 hours of her birth date: 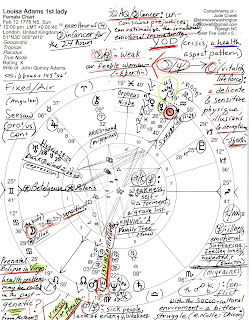 Since we have no known birth time, house cusps, houses, and chart Angles will not be used, only planets and their conditions. First we cannot fail to see that marked upon the chart are several references to illness. Moon represents the physical body, emotions and feelings, and of course we know these days of the mind-body connection with emotional shocks, difficulties, and torment affecting one's health (ex: adrenal exhaustion). Asteroid of health and hygiene, Hygeia, is prominent for its conjunction with Uranus, planet of sudden shocks. Loss of babies and children was a major issue of her era--no less traumatic now, but we're talking about Louisa who bore a child in 1811 and lost the baby in 1812. In her chart we see the conjunction of two asteroids of melancholy, Orpheus and Niobe (the grieving partner, and grieving mother in saddened Pisces).

Then there's the YOD pattern (penned on the chart, upper right) which can suggest health issues and/or crisis or turning point. Yet with the fast-moving Moon involved, we may wish to discount the midpoint picture the YOD provides but I list it here anyway for your consideration:

Moon-Neptune (a weak or feeble woman) = Sun (vitality; life force--Ebertin) with potentials for: 'a delicate and sensitive physique; illusions and deceptions' (Ebertin). Also affecting her health and constitution, Louisa Adams' Prenatal Solar Eclipse ('PE') @13Vir28--in Virgo, sign of Health--denotes medical conditions that may be rooted in the past (R. Lineman). On the chart (lower left) I penned, 'genetic? from Mother?' 'Mother' because the eclipse is in feminine sign Virgo, ruled by thinking Mercury which can become over-stimulated with anxiety and worry. Here I should add that Uranus and Hygeia in late Taurus conjoin one of the Dark Moons (W'Mat2, a hypothetical point, if memory serves) which to me suggest a tendency toward depression. My suspicion is that sudden shocks via electrical, unpredictable Uranus had something to do with her debilitating conditions--falling into a faint, nervous irritation, and other physical expressions.

A last mention in the realm of poor health has to be how Louisa's PE is snugged between a health-related pairing, Mars and Neptune, which together can lead to contagion and infection--here in Virgo that, along with its opposite sign of Pisces, forms the victim-savior axis.

It's revealing to note that there are two midpoint pictures with weakening Neptune as apex planet:

As for Louisa's life of foreign travel, I spy only her Sun and speedy Mercury (the traveler) in Aquarius, a sign which tends toward restlessness and a widened world view. Perhaps you see more travel implications (Jupiter and Uranus are both in fixed Taurus with a 19-degree orb) and if so, feel free to leave your on-topic comments with this post, and please Share if you Care for it will encourage more JCAstro posts. Thanks! jc

I neglected to mention wounded healer centaur Chiron in Aries which rules the head ('migraines'). jc

And I just noticed that the current position of the Moon (January 29, 2020 7:00 pm est) is conjunct Louisa Adams' natal Chiron! jc