February 27, 2020: You know how 'they' say that character is destiny and how Astrology says that how we begin is how we end? Well, here are some interesting notes quoted from The Progressed Horoscope by 'the father of modern astrology' Alan Leo (1860--1917) on the soulful issues of heredity, environment, and character as destiny--all of which can be determined through astrological principles:

"Heredity supplies the vessel,--pure or impure according to past causes in previous lives,--by an affinity of physical particles, like attracting like.

Environment gives conditions in which expression may be made of the latent qualities inherent in the soul, and it harmonises with the actual needs and requirements of the soul in order that the latter may obtain its freedom from the fate of other previous lives by paying off old debts it has incurred and by developing those traits of character for the lack of which the continued evolution of the soul, at the point then reached, would be delayed.

Character is that inherent quality of the soul which it brings with it as a asset , and is the 'root of merit' through which it is either susceptible and conformable to the environment, or rises above and dominates, alters or changes it.

Perhaps here I should state that yours truly is a Saturnian astrologer so to me, "past lives" always refers to the DNA found in natal charts - to our ancestors and their "old debts" and issues handled well or poorly during their lifetimes and passed down through the generations as our inherited traits and issues which we can either flub, or deal with successfully (which leads to karmic progress). Also, my belief is that when our Creator breathed the breathe of Life into His creations "man became a living soul" (KJV) - not that we 'have' a soul that can 'bargained with' - but that we are souls! Therefore, in many instances when authors refer to 'the soul', I take it to mean the spirit for we are souls (persons) gifted with the Spirit of Life which, at death, "returns to God who gave it." Now you may disagree as you wish, but there it is!

For the curious, here's a view of the B-rated natal horoscope of Alan Leo (nee William Frederick Allan) born August 7, 1860 5:49 am GMT Westminster, England (chart also seen, below) with Sun, Mercury Rx, Jupiter, South Node, Saturn (rising), and Ascendant in Leo, and Midheaven ('MC') in wealth-loving Taurus conjunct his 9th house Pluto in Taurus ('the urge to acquire'--Ebertin). A different birth time is available as well--6:10 am GMT with 00Virgo rising which makes his 12th house Mercury in Leo his chart-ruler rather than his Leo Sun (at 5:49 am = ASC 27Leo03 with Saturn upon it--see chart, below).

Either way, royal Regulus rises with Saturn, ruler of Astrology, and his 5th house Mars @20Capricorn (a critical degree) is Rx, out-of-bounds (acting out of the mainstream: Astrology as a profession!), and leads a Locomotive shape of his planets suggesting a ruthless, high-powered executive determined on success, particularly during his Mars stage of life (25 to 35 years of age or so). Born during a Disseminating lunar phase, Alan Leo tended to spread information to the world through writings and consultations. 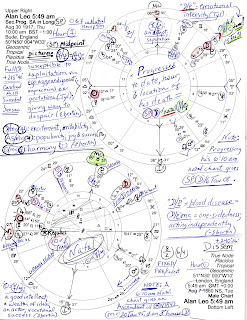 Also we may wish to consider the Prenatal Solar Eclipse Saros Series ('PE') that Alan Leo was born into, the 6 South which for him perfected on July 18, 1860 @26Can05 in natal 11th house of Group Associations. A PE in Moon-ruled Cancer suggests karmic family ties, imagination, sensitivity, receptivity, and possibly psychism--and reveals that emotional extremes can block karmic progress (R. Lineman). 6 South themes are: 'manic energy; being forceful and taking power; great force or strength manifesting in relationships; sudden events may occur; exerting huge effort in some group activity' (paraphrasing Brady's Predictive Astrology).

Credited with the concept of 'destiny is character', death arrived for Alan Leo, the legendary astrologer and Theosophist, on August 30, 1917 at 10:00 am GMT, Bude, England. And curiously, as you see in his SP chart, above, there are midpoint pictures in the chart but there are no aspects between his SP planets at all, may he R.I.P., for his work on Earth is done.