Horoscope of the Discovery of Neptune

Now you've heard the inspiring story of the Discovery of Neptune on the night of September 23-24, 1846 at the Berlin Observatory (Horoscope, below).

For context, check out a list of 1846 Events if you wish, several of which are downright Neptunian. Examples include: mass media - the AP is founded in May; church - a new Pope succeeds the old one June 14th; music - Parisian inventor patents the saxophone June 28th; pain relief - first public demonstration of ether anesthesia October 16th; death by starvation, loss - The Donner Party is stranded in the Sierra Nevada Mountains November 4th, for 3 months.

Plus, in early 1846 - the first starvation deaths occur in Ireland's Great Famine; and, 1846--1860 - a cholera epidemic sweeps through South Asia and the United Kingdom.

Now since urge-to-merge Neptune in mystical if contagious Pisces now opposes US Neptune in practical Virgo, sign of Science and Health across the victim-savior axis, America has been afflicted and undermined the last few years by lies, fraud, corruption, scams galore, and other less than honorable conditions and events such as racial and other types of persecution, so here's a view of the Horoscope of the 1846 Discovery of Neptune with my messy study notes penned on: 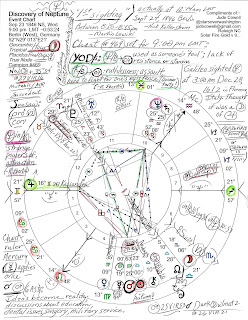 As a versatile, inspirational, watery, insinuating, and karmic planet, astrological Neptune can play many roles in Astrology and runs the gamut, as they say - everything from the Divine Source, spirituality, the masses, mysticism, mysteries, fakery, smoke screens, veils, and the occult - to sadness, disapppointment, illusion, delusion, erosion, apparitions, hallucinations, suggestions, escapism and drugs, undermining activities like theft, subterfuge, subversion, and sabotage. Plus as you know, water and storm disasters, fumes, poisons, toxins, gas, oil, unconsciousness, drunkenness, and other unfortunate events and conditions can occur whenever oceanic Neptune is involved.

Yet naturally we mustn't forget the fun things like photography, celluloid film, glamour, theatrical productions, romance -- and the Silver Screen. Any or all of these possibilities may lurk within Neptune's discovery chart, shown by the attendant planets and their cosmic conditions. Why even, the chart's Saturn-Neptune Conjunction suggests creative talents but also may indicate difficult societal conditions and/or forms of weakness, scarcity, and/or poverty. And of course "secret" or "invisible" (Neptune) "government" (Saturn) may have been on the political menu in 1846 as it is now.

Plus, to me the YOD/s that form with Mars in scientifically-oriented Virgo as apex planet makes for quite a bit of pondering, I think, especially since three heavyweight planets are in sextile at the YOD's base: Neptune-Pluto and Saturn-Pluto. So immediately we can expect that health conditions may be involved as well as karmic opportunities, special tasks, turning points, crossroads, and/or crises. Actually, some of these indications are on the Events of 1846 list or the 'possibilities' list, above.

So if you're up for it, dear reader, leave a comment and let me know what you discover about or within the Discovery Horoscope of not-so-easy-to-pin-down Neptune!