Unveiling Ceres - the video (plus, Ceres as Mother Earth)

Asteroid Ceres (#1) was discovered by Giuseppe Piazzi on January 1, 1801, the date that Ireland united with Great Britain which suggests a special relationship between the archetypal harvester, Ceres, and the country and people of Great Britain. Plus, a link is suggested between the discovery location of Ceres, Palermo, Sicily, and Britain. Ceres has become a practical expression of the Greek goddess Demeter whose namesake asteroid wasn't discovered until May 31, 1929, Heidelberg by K. Reinmuth.

Besides representing The Mother archetype, Ceres may also signify the Grandmother, the nurse, a nurturing teacher, governess, nanny--whoever tends to the nurturing and care of those who need it. Of course, the astrological Moon tends to nurturing and mothering, too, and her sign describes our reigning need (Tyl) but the fluctuating Moon is more changeable, even erratic, than Ceres (and Demeter), two archetypes that relate more to feelings of devotion to a higher purpose. And for the harvesting of the grain and other food stuffs, Ceres and Demeter describe the necessary work and resulting productivity such work requires.

In a natal chart, the midpoint between natal Ceres and Demeter shows where their energies combine, are highlighted, strengthened, and may be activated by transiting planets, and other astrological configurations and conditions. Even a Ceres or a Demeter Return is significant for those with either asteroid prominent in their charts and psyches and will relate to a new cycle of activity in the realms of nurturing, productive work, and/or mothering.

Perhaps at or near a Return of the Nurturers, a new diet attracts!

Now here is a close up view of asteroid Ceres which, as is so often the case, favors a large and tumbling potato: 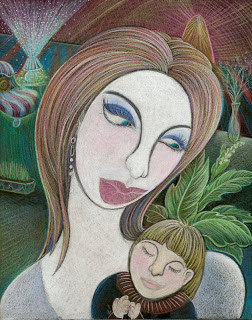