Horoscope: the Prenatal Solar Eclipse of Virginia Dare of the Lost Colony of Roanoke

American History and Astrology Meet in a 1587 Solar Eclipse Horoscope

Because an eclipse and its horoscope can be accurately timed, the following horoscope is presented and shows the Pre-Natal Solar Eclipse of Virginia Dare, the first English Christian child born in the New World. It also reveals the background influences for the voyage of Virginia's grandfather, the artist and Governor John White, who left Roanoke for England to obtain and replenish the Colony's supplies but was prevented (by war) from returning until 1590. When he did return (on Virginia's third birthday) he discovered that the colonists (including his daughter Eleanor, his son-in-law Ananias Dare, and little Virginia) had disappeared. This resulted in the famous Lost Colony of Roanoke mystery: 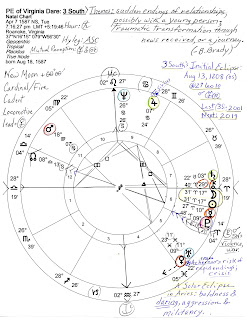 Please enlarge the chart to read my study notations for not all will be repeated in this text.

Hour of Saturn (3Tau22 setting) with Wounded Healer, blind spot, and/or priest, Chiron at a critical-crisis 29th degree. Rising is late Libra, sign of balance, diplomacy, and relationships--in fact, we might say that relationships (besides sustenance and safety) had to be a primary concern in the Colony for pioneers must depend upon others of their expedition in order to survive. That, however, does not factor in the Colonists' belligerent neighbors, some tribes who were waging war with other tribes, and the stark environment they dealt with for the Roanoke area in the year 1587 was a time and place of drought, deprivation and hardship for everyone. The applying aspects of chart-ruler Venus are included, below.

Now as you see, the 3 South Solar Eclipse is in Mars-ruled Aries (17:31), a Fire sign, which denotes boldness and daring, aggression, challenge, pioneering, adventurism, and a potential for militancy. Powerful, sneaky Pluto conjoins the South Node of the Moon, usually an indicator of violence and/or war with the South Node having a separative Saturnian vibe and possibly showing neurotic tendencies and reliance on past behaviors. Yet a nervous and critical Mars is retrograde (Rx) in tidy Virgo describing weakening conditions while Venus, lover of relationships, conjoins separative, disruptive Uranus, both in gentle Pisces where Venus is exalted. And of course, the Virgo-Pisces axis is that of the victim-savior; lady Venus is the engine of a Locomotive pattern (success; possible ruthlessness) with the rest of the planets (actors) following her direction (to live with the Croatans as the carved messages left behind for John White suggest? The signal he and they set before he sailed was to carve a Maltese Cross in the settlement if they were attacked or under duress--and no Cross was carved). Below is a Maltese Cross in the St. John Co-Cathedral on Malta, a symbol which suggests (to me) secret society and occult involvement in Sir Walter's Roanoke enterprise: 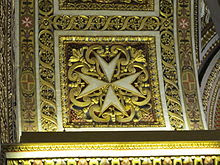 Now to see how things will proceed, we look to chart-ruler Venus which makes only one applying Ptolemaic (major) aspect in the eclipse chart, a conjunction with Uranus (1A47). This denotes the forming of non-traditional, unconventional, or unusual alliances, and considering that Venus leads the other planets (actors) we may be looking at a cosmic picture of a leader promoting the idea of joining and living with a friendly tribe of Indians for the purpose of survival. A second applying aspect of Venus--though it is not considered to be Ptolemaic--is a sesqui-square to hazy Neptune (2A03) which suggests the necessity to overlook flaws in their less-than-ideal circumstances, with delusion, illusion, deception, and false flattery as part of the picture. Plus, Neptune is stationing and is turning Direct, as noted, above. Stationary planets are considered strong.

As for the themes of 3 South, they include an apt description of what was happening in the Colony for the White family and others. On the image the details are penned, upper right, but I'll type them for you here: sudden endings of relationships, possibly with a young person; traumatic transformation through news received, or via a journey (Brady's Predictive Astrology). In modern times, 3 South manifested in the years 1911, 1929, 1947, 1965, 1983, 2001 (@23Sag), and next, on December 26, 2019 @4Capricorn. Its initial manifestation occurred on August 13, 1208 @27Leo10 conjunct Mercury Rx so whatever sign it occurs in since 1208, its influence must be seen through, and colored by, Sun-ruled Leo so that a tendency toward arrogance and pomposity in leadership should be avoided for best karmic progress to be made.

Another interesting chart factor is Mercury, planet of toddlers, traders, travelers, and tricksters, for it conjoins Pluto, a conjunction indicating extreme conditions and seriously deep topics of conversation, plus, an investigative flair. Does the Mercury-Pluto conjunction then foreshadow Governor John White's search for cryptic symbols, clues, or the agreed-upon symbolic messages upon his return in 1590? Possibly.

Well, there's oceanic Neptune near the top of the chart--actually in 9th house of Foreign Travel; Neptune is stationary and turned direct 13 hours 16 minutes before this eclipse perfected, a condition which spotlights idealistic Neptune and its ability to obfuscate and prevaricate. On another level we can read the conjunction as death (Pluto) of an important child (Mercury), and loss and sorrow (Neptune) via tribal (Cancer) incursions (Neptune). Do you know of other cosmic correspondences that apply to these events of long ago?!

Then there's wide vista'd Jupiter in tribal and watery Cancer, also a sign of the seas and the crabs and fish within them, for the planet of expansion conjoins and spotlights fixed star Sirius (sudden loss or fame, murder) which to me suggests 'ocean voyages meant to result in Jupiterian wealth and prestige' (ex: the Roanoke expedition) but which involved murders and death galore. Sir Walter Raleigh's funding of this foray to the New World via a Colony on Roanoke Island was a gamble, a speculation, an investment, intended to pay off big (as Jupiter prefers--and tribal Cancer is a sign of family and shrewd business ability). His brother had already attempted this adventure and this was their third try. Another factor is that Jupiter rises with Castor, a star of sudden loss or fame, crippled limbs, and/or murder...again, death.

Well, there's my look at the Prenatal Eclipse of Virginia Dare. Hopefully my using the eclipse chart to search for clues concerning The Lost Colony mystery is helpful to you since no accurate birth time is known for Baby Virginia, the first English child born in what became America, as I'm told. And so in closing, I sincerely say...

For more details on the Roanoke Island mystery, consult the Visitor's Guide at OuterBanks.com where you'll find history, theories, and more. Having visited the Outer Banks myself I highly recommend the islands for vacationing if you actually need a recommendation to coerce you to NC beaches--and with a history of the Roanoke Colony and pirates' buried treasure, too! Plus, I shall also add this:

Excerpt: "On July 22, 1587, John White landed on Roanoke Island with 120 men, women, and children. As governor, White hoped to establish the first permanent English settlement in the New World by developing a self-sufficient economy and agriculture. On August 18, 1587, the first English Christian was born: Virginia Dare". Read more...

Astro-Note on Virginia Dare's birth August 18, 1587 shows Sun in Leo (conjunct royal Regulus: success if revenge is avoided) and Moon in either late Aquarius (like the US natal Moon of July 4, 1776) or creative Pisces--so baby Virginia had a Fire-Air personality (mentally active, full of ideas, an extrovert) or a Fire-Water blend (moody, volatile, artistic--creative inheritance from her grandfather, artist-mapmaker John White?) But tragically, if Virginia Dare died by age 4, these tendencies had few chances to express themselves during her short life and her difficult environment must certainly have interfered with their natural development.