On the Natal Horoscope of Astrologer John Dee

From what I gather while searching the Web, the following seems to be the favored version of the natal chart of polymath and Renaissance astrologer John Dee; brief details, below: 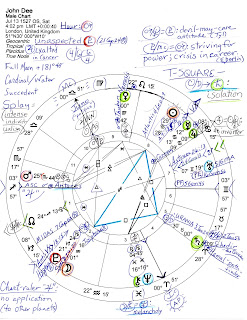 My source? Why not check out his birth chart with details (RR: DD) at astrodatabank.

The Book of Enoch

Hidden within Dee's secret journals for centuries was his work with 'angels'--the Watchers--the fixed stars that we now call Regulus, Aldebaran, Antares, and Fomalhaut. Dee asked 'the angels' to reveal to him the lost Book of Enoch but he was ahead of his time for it wasn't until 1773 that explorer James Bruce brought back to England 3 copies of the book which was later published. For more details on John Dee, you may wish to try a book published in 2015 entitled, John Dee: Master of Enochian Magic. Plus, here's an article on Dee which sets the record straight concerning Enochian Magick, a label for his work never used by the man himself.

Now as you see in the natal horoscope, above, Dee was born with Sun and Moon in opposition yet in dissociate signs: Sun @29Cancer (ruled by the Moon) and Moon @1Aquarius, ruled by Saturn (for Uranus was not yet discovered). Of course, his birth hour doesn't have to be off by much to give him an early Leo Sun but we'll go with the chart we have here. Perhaps the timing of his 29th critical-degree'd Sun is correct for his life was sprinkled with quite a few crises. After all, serving monarchs (Queen Elizabeth I and James I, to name two) centuries ago was often fraught with serious difficulties and penalties depending on whether he or his patrons were 'in favor' or out. Yes, he was called "a conjurer" in his day and yet Dee was a devout Christian who plunked himself in the middle of the Protestant vs Catholic turmoil for he wished to bring both sides together. But such harmony was not be and personally I don't see how it could've been.

And yet this brilliant mathematician, metaphysician, astronomer, and astrologer managed to end his life still serving in the position of Warden of Christ's Church, as appointed by Queen Elizabeth I. Retiring in his later years to his beloved Mortlake, a broken, poverty-stricken John Dee eked out his existence as an astrologer counseling people on their horoscopes. After he passed away many lies were told that undermined his name and reputation which even now contributes to a lack of esteem for this occult pioneer of long ago.