The Longest Total Solar Eclipse of the 21st Century!

Wednesday June 23, 2021: Today I'm researching multiple Solar and Lunar Eclipses as they influence political and social realms and ran across an interesting tidbit of eclipse info - that the longest Total Eclipse of the 21st Century manifested on July 22, 2009 with Totality lasting 6 minutes 39 seconds.

Now here on Jude Cowell Astrology yours truly always attempts to leave Political Astrology "out of it" for I prefer this blog to be for more general astrological topics and horoscopes, or esoterism. However, there's not much I can say without mentioning significant events of 2009 which occurred during the presidency of Barack Obama, so please pardon!

So the thing is, the July 22, 2009 Solar Eclipse fell into the 11 South Saros Series and perfected @29Cancer26. The Sabian Symbol for "30 Cancer" = "A Daughter of the American Revolution" and you may remember the beginnings of the conservative 'Tea Party' movement in 2009 and the tri-cornered hats and outfits some of them wore, plus, the interruptions they caused the majority, and the fact that they were active during the feckless 2016 Campaign of Tr*mp. Furthermore, any eclipse in the Moon-ruled sign of Cancer relates to tribalism, nationalism, patriotism, and family ties, and, the Moon in Mundane (Political) Astrology in the US = We The People/the public.

Note that in the center of the eclipse chart, below, I've penned "Jupiter conjunct Chiron = zealotry." Also you'll note that Jupiter and Neptune met 3 times all through 2009 and simultaneously hit US natal Moon = 'little sense of reality; dreaminess; swooning' - which for millions of people described their feelings about "rock star" Barack Obama. Meanwhile, the expansive bubbly, speculation pair of planet$ will forever be cosmically imprinted upon the Obama White House. And quite notably, they conjunct in the 1792 'Buttonwood' Horoscope of the New York Stock Exchange ('NYSE'). But when Jupiter and Neptune conjunct next time on April 12, 2022, it will be @23Pisces59 which may act as a poke of America's misguided Mars-Neptune square of 1776, a cosmic triggering which could stimulate expressions of religious and/or bizarre ideas that will have to be defended. Perhaps the forces and entities determined to turn the US into a theocracy may advance under these energies, but hopefully not. Of course, the gaseous, overblown pair also relate to 'political conflicts, scandals, mysticism, visionaries, loss, and/or gain without effort' (R. Ebertin).

So! The difficult themes of 11 South eclipses involve a lot of turmoil, as we know: 'the need for sudden reforms; old ideas and methods fail so new systems are required to deal with events brought by the eclipse; new ways of handling issues are necessary; any blocks could be violently or tragically removed' (paraphrasing Brady's Predictive Astrology #ad). The next 11 South Solar Eclipse manifests on August 2, 2027 @10 Leo.

Okay, so I'll hush my fussing now on behalf of America and the common good, and add here the Total Solar Eclipse Horoscope of July 22, 2009 set for Washington DC in case you'd like a peek or perhaps a small review: 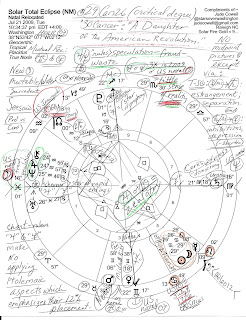