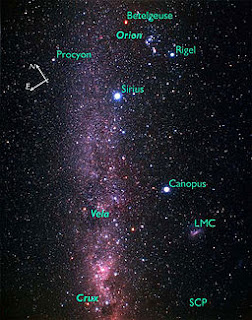 In 2011, astronomer Brian Ventrudo wrote on Canopus (alpha Carinae) the second brightest star in the sky after Sirius. This was before he changed his site's title to Cosmic Pursuits where you'll find articles on a variety of night sky objects such as stars, nebulae, constellations, galaxies, and more. Be sure to check out the awesome May 2017 photo of the beautiful Sombrero Galaxy.

Plus, Brian always publishes on each month's night sky wonders with maps and information on where to view them. In summer, Canopus and Sirius are directly overhead in the southern states (above 37 degrees North, Canopus lies too low to be seen).

Astrologically, the keywords for Canopus, the keel, are: the navigator and the pathfinder and it is linked to the story of the Argo and the rescue of Helen of Troy but there is much more to Canopus. When linked to natal planets, Ptolemy associated the star with Saturn and Jupiter, Robson with 'piety, conservatism, and turning evil into good'. Ebertin connects Canopus to 'a love of travel' while Rigor adds the more negative potential of 'domestic problems'.

(Ex: if the natal planet linked to Canopus is fussy Mars, the potential for domestic problems would be more likely to occur due to conflicts and quarrels.)

Some cultures, including certain Native American tribes, linked the precession of Canopus with timing the end of the world, and other ancient cultures considered it the weight at the end of the plumb line that defined earth's poles so that the plumb line's movement explained the effects of precession on Canopus, sometimes known as the Point of Stillness in the south. Plus, the star was once worshiped in desert cultures as the Star of Egypt (instead of Sirius!) and in China, the red star is associated with happiness, success, and a long life which makes it the Star of Old Age.

For as Brady's Book of Fixed Stars relates, "In about 6,000 B.C.E. {Canopus} was the heliacal rising star for the autumn equinox and a series of temples were built in Egypt in alignment with these risings. Modern people see this star now being claimed by NASA, as they use this ancient location point as a navigational aid for spacecraft." Canopus--still the navigator!

In natal horoscopes, Canopus (14 Cancer) is a powerful star which can provide leadership skills. New directions may be inspired by Canopus which acts in similar fashion as the royal stars which always include a 'caution' (ex: royal Regulus: success if revenge is avoided--otherwise all gains will be lost). With Canopus linked to a natal chart, success is possible but its caution lies within the flaw of needing too much control.