Mount Vernon the estate of George Washington during his lifetime: 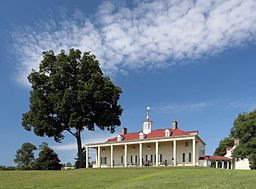 Now it probably comes as no surprise to most Americans that our first President and Founding Father George Washington was interested from an early age--the 1750s to be exact--in genealogy and his ancestral ties. In fact, the Smithsonian Institute reveals that a certain Document Written by George Washington Lays Bare the Legal Power of Genealogy if you'd care to check it out.

Of interest as well is a 1995 Washington Post article concerning Sulgrave Manor, the Washington family's estate in Oxfordshire and to this day a popular tourist attraction. Little did the early Washington family (royalist supporters of Charles I) realize that one day a descendant bearing their name would lead a Revolution against the British crown and refuse the title and scepter of a monarch!

Well, perhaps George's ancestors simply lived too early in history to be bitten by the Freemason bug that would instill a deep desire to establish the Utopian ideal of a New Atlantis across the sea. That would be us and this is what politicians and pundits mean when they say that America is the only country ever created based on an idea - which is actually Plato's Ideal! Yet created to be a Beacon to the World of liberty, freedom, and equality, our democratic Republic's light currently flickers alarmingly due to undermining saboteurs and infiltrators of a totalitarian kind.

Well, here's some news--this Child of the Revolution with ancestors of my own demands that The Beacon remains lighted, thanks. How about you, dear reader?

And Note: the reason I thought to post this now is that Dr. Fiona Hill, in her opening statement during the impeachment inquiry of Donald Trump today in Washington DC, mentioned that she's from the region in Britain where George Washington's family hailed from and her family has many ties to America! jc