Charles Jayne and a Case of Cosmic Time Links

An Attempt to Catch Up with Pioneering Astrologer Charles Jayne

Early this morning as I followed certain interests via a favorite podcast (see link, below) my attention landed upon pioneering astrologer Charles Jayne (Oct 9, 1911 - Dec 31, 1985) whose natal horoscope, sparse biographical details, and a variety of rectified times of his birth (including his own efforts) may be viewed at astro.com. However, it turns out that this morning's podcast episode features not a relative of master astrologer Charles Jayne, but takes an intriguing look at Julian Jaynes, author of The Origin of Consciousness in the Breakdown of the Bicameral Mind.

Check out Josh's and Chuck's August 4th episode Thrill to the Stunning Bicameral Mind Hypothesis if you find yourself having 49 minutes to spare! You won't be disappointed.

Now Back to Charles Jayne

A master of rectification, Charles Jayne was associated with the Church of Light and counseled that astrologers should study Astronomy. You'll find an article about him written by Bill Meridian on the Urania Trust website. In fact, his natal asteroid Urania is interesting to me for his Urania @4Sco08 conjuncts his and my South Node! 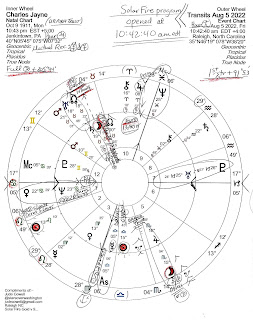 Surrounding his natal chart, above, you see the horoscope of the moment that I opened my Solar Fire astrology program at 10:42:40 am edt, Raleigh, North Carolina (with transit Pluto Rx @26Cap57 still hanging out upon my natal Mercury). Multiple planetary contacts from 2022 to 1911 are circled, most are conjunctions but with a couple of oppositions as well - and naturally, you may spot other contacts not listed here:

conjunct Neptune and opposite his Uranus casts a favorable (photogenic?) light upon Jayne's Uranus-Neptune opposition of higher consciousness and mystical-occult interests and talents; the negative side back in 1911 would be delusion on a mass scale, muddled thinking, confusion within society, and/or ill-fated social movements (A. Oken). As you know, the First World War was soon to be waged. As for August 5, 2022, Venus to Neptune is an elusive, mystical influence favorable for abstract thinking (a la Julian Jaynes) and spiritual pursuits, while Venus opposite Uranus suggests that his and my values clash in a generational way, probably in the realms of relationships and/or financially, and with a potential for judge-iness (on my part!).

conjunct his IC hints lightly at possible ancestral connections but probably more of an in-law situation, if at all. Since he doesn't seem to be in the geni dot com database, I can't check him out there to see if we share kinship so perhaps astrological interests are all we share - and I was in my mid-30s when he passed on in 1985 and didn't begin my full-time astrological studies until 1996.

conjunct his Jupiter tends to be a happy cosmic link whenever we see Moon-Jupiter contacts and can also suggest religious vibrations and/or a business link (via Astrology? Jayne was a master, I'm only a novice making very little income from the venerable craft, but okay!).

so it's actually today's aligning Venus-Pluto opposition doing some heavy astro-lifting. Actually, I'm going to call Venus-Pluto on behalf of creativity and add that Pluto opposite his Neptune is another generational contact suggesting differences in outlook, even social or political ones; additionally, Pluto conjunct his Uranus has the potential for technological advancements by which we in 2022 benefit. Mr. Jaynes, not so much. Plus for me, a certain startling quality is added to today's path of discovery because writing anything at all about the legendary Charles Jayne was nowhere on my list of things to do. Yet it was a surprise to see how many planetary and Angular cosmic time links there are.

which makes two contacts involving Osiris - here, rising in my consciousness if not yours - plus, messenger planet Mercury is integral to all studies and practices including Astrology. Asteroid Osiris and its archetype suggest many possible meanings such as unity or re-uniting, devotion, fertility, death and resurrection (as Egyptian god of the underworld), indecisiveness, fitting the pieces together, and dual personality. And with Mercury the 'tofu planet' (soaking up whatever it touches), I'll venture to say that his thinking was melded with the Osiris archetype. So perhaps this morning's contacts to Jayne's natal planets are meant to spotlight in a timely fashion his obvious mystical and astrological talents since I've never researched him or his work as fully as I should have. This can be corrected!

Jupiter opposite his Mercury

, another contact spotlighting his Mercury, planet of thought processes (a la Julian Jaynes's work!), and communication (as I'm attempting to do now via typing this at you - but obviously, his writings are indicated). Notably, Reinhold Ebertin gives Mercury in Libra as, "creative thinking within patterns already in existence," which may be a reference to Jayne's work as explored by a novice astrologer such as myself. And in general, we know that a Jupiter-opposite-Mercury transit can signal the acquisition of too much information to handle well, or, of information presented that is discounted by readers such as yourself. Finding time to further an exploration of Charles Jayne's writings will be a time-related issue for me - and mention should be made that another function of Mercury is sight.

Chiron Rx opposite his Sun-Sisyphus conjunction:

no notes here on Chiron for we've covered the centaur's meanings and archetypes in multiple posts, but Jayne's hero's journey or goal in life involved the Sisyphus archetype of dogged determination, repeating his tasks over and over again. This is often the case for dutiful people who must work very hard in order to accomplish what they feel the Cosmos requires of them. Perhaps most revealing is that in general, a Sun-Chiron opposition denotes a mentor relationship with one acting as a psychopomp, (Initiator), or a guide (R. Nolle).

conjunct his Saturn Rx: this is quite a karmic trio indicating circumstances in which restriction (his death) receives some measure of freedom or alteration in some way. My take is that his creative work in Saturnian form is being activated technologically (online) by an astrologer (Uranus) if I may presume to say so. It is, however, a reference that contains old vs new vibrations while his Taurean Saturn suggests preservation of tradition. No, I'm not a traditional astrologer, but I am a Saturnian one. Meanwhile, North Node denotes encounters, and his astrological work and horoscope (Father Time Saturn, traditional ruler of Astrology) have been encountered by yours truly this very day.

, the Goal Point, with Neptune strong in its own sign of mystical Pisces, (the sign of my natal Moon), a transit that tends to reveal public relations issues, and perhaps a need to carefully consider my future direction in relation to Charles Jayne and his fabled career. Well, at this point, my direction is pointing toward locating the books of Charles Jayne that are available, particularly his book on Progressions and Directions which is now on order!
Posted by Jude Cowell at 6:39:00 PM