By now the world has heard the news of the passing today of Queen Elizabeth II of the United Kingdom, age 96, and on the throne for 70 years. Therefore, son Charles Prince of Wales is now King Charles III. Both mother and son are distant cousins of mine yet perhaps it's too soon to publish the following bi-wheel that I'm about to post, below, yet it seems I'm about to display it anyway. Offended readers, please turn away!

Official reports have been rather general - that the Queen died "peacefully" in the afternoon at Balmoral Castle, Aberdeenshire, Scotland so the outer horoscope had to be timed somehow. For this I chose a speculative time of 1:33:34 pm BST based on today's exact conjunction of Moon and Saturn Rx (20AQ08) for the pair relate to health and loss, and at this degree they conjunct her natal Mars (20AQ51) in her 1st house (Self; Physical Body) which also links to her Jupiter-Neptune opposition (22AQ/Leo30). 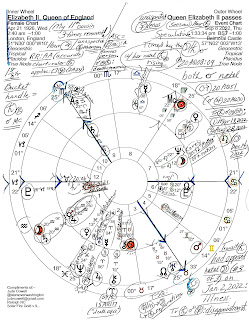 The Queen's natal Mars-Jupiter conjunction denotes the enormous energy level she enjoyed all through her life, plus, her longevity at age 96. However, timekeeper Saturn, karmic planet of loss, endings, and separations (and Saturn Angular in her natal chart, a signifier of her longstanding rulership), had already hit natal Mars (energy, action, motivation) on March 19, 2022 and again more recently on August 28, 2022; a third hit would have occurred on December 14, 2022, suggesting failing vitality made more serious due to her advanced age, and aggravating any medical conditions she was experiencing.

So with wounded Chiron (15Ari23 Rx today), the Christ archetype in Astrology, conjunct today's Mars-Saturn midpoint (the 'death axis', says Reinhold Ebertin), and conjunct the star Alpheratz, I'm about to type something which may seem erroneous to some: that, because of the presence of Alpheratz, and after 70 years on the throne doing her duty, the chained woman has finally been freed. So there it is.

Oh, and two more things: today Mercury (8Lib47) in the 8th house conjuncts another star, royal Diadem whose keywords are quite appropriate as perhaps you may agree: the crown that comes with a price. Meanshile, urge-to-merge planet Neptune (24Pis16 Rx) of the Divine Source today casts a veil over the position of a very notable asteroid in relation to the royal family: Diana, whose namesake was killed 25 years plus a few days ago on August 31, 1997.

Yes, there are other indicators of significance, some of loss and of illness penned upon the chart (please print or enlarge the image for better viewing) for those who care to have a look, but for now, I'll simply send my deep condolescences to the family and to the people of the United Kingdom who have today lost a mother figure (asteroid Ceres the mother @20Leo52 is opposed by Saturn and Moon), and a sincere wish for Queen Elizabeth II that she may R.I.P. after a dedicated job well done.