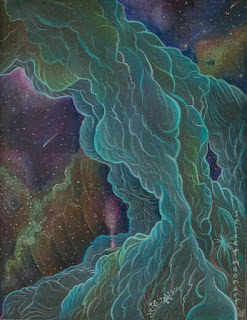 While organizing some of my Astrology materials today I ran across a relic of a folder on which I'd made notes years ago regarding Astrology's parallels and contra parallels and which may be of use to a reader or two. Now in these notes some attributions are listed but if not, mea culpa because I've no idea who the credit should belong to, if anyone. Because when I say "relic" I mean these notes are gray around the muzzle for I've studied Astrology full time since 1996, and part time since age 12 (many moons ago!). So here goes:

Basically, the orbits of most planets lie within the same geometric plane, a two-dimensional representation used for horoscopes. Yet with an occasional variation in their tilts, planets may lie either north or south of the celestial equator (found by projecting Earth's equator against the background of the stars). Astrology software reveals this information for each planet as measured in degrees of declination. North declination is shown by a + sign while south declination is shown by a - sign, and planets with the same declination (+ or -) have a relationship similar to a conjunction, some say a strong conjunction (1-degree orb) while some say the influence is milder or more passive and spread over a longer period of time than a conjunction which may be within orb for a brief time depending on the planet's rate of orbit.

Therefore, this is a planetary condition which must be worked with in a variety of horoscopes to see how they express within in your readings. Because with many variables and factors in horoscopes to consider, strength or mildness may vary, of course.

Now for years I've tended to use parallels and contra parallels as timing devices by considering, for example, an exact conjunction between two planets, then checking whether or not they are parallel. If they are, action may occur and very soon for strength or an imperative to act is added to the indications of the conjunction (plus, planetary tendencies must also be considered (ex: if involved, Mars is always impulsive to act, even eager or hotheaded, while Saturn may slow things down). If not yet parallel, a longer time frame is indicated and we can look ahead to see when the planets under consideration will be parallel by using an aspect grid. Their exact conjoining by both aspect and by parallel is a powerful timing device!

Parallels are, "a sustaining force, which may remain latent unless difficulties or a crisis arises that tests the native's strength" (Robert DeLuce).

Well, this adds an intriguing layer of useful information to horoscopes, yes?

Then to paraphrase M. J. Makransky, 'Parallels may operate more on an intuitional or feeling level than a conjunction' and 'may be a more satisfying use of energies'. Regular aspects respond to rewards and punishments of society'. But with 'expectations and pressures associated with social and cultural demands' parallels 'provide liberation from those demands' and 'the more parallels in the chart, the greater the freedom of choice. One pursues one's own star'; parallels are 'beneficial, although they tend to isolate one because they lead one along the road less traveled'.

Now to close, here are the last of my // notes from the folder, perhaps gleaned from M.J. Makransky and probably only paraphrasing him, if you'll allow: 'Parallels show a more spiritual side; they exemplify an ideal of individualistic effort while blazing a new trail all by one's self.'

Well, this makes me want to count my parallels, how about you?

A Final Note: Here you'll find M.J. Makransky mentioned under Mundane Aspect, and here is the natal horoscope (RR: B) of Robert DeLuce, a pioneering astrologer, author, lecturer, and an expert on Hindu Astrology, born August 24, 1877 with a Sun Virgo-Moon Pisces personality blend. DeLuce's books include topics such as rectification, prediction, and horary.

Got more info concerning this topic? Then leave your name-tagged observations via comment! Thanks a bunch, Jude