Outlaw Robin Hood and the Eclipses of 1226 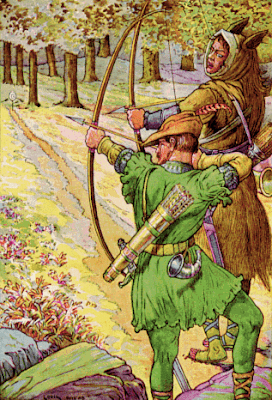 Traumatic Transformation: How to Become an Outlaw in 1226

Have you ever checked out the Wikipedia page of Robin Hood? One of the most well-loved heroes of legend, as everyone knows, but such long-ago days natually limit what can be known for certain. Is Robin Hood (or, 'Robin Hod') only a myth, although perhaps a myth based on a real person? That's my pesonal feeling about his origins but of course, you'll decide for yourself, dear reader.

Intriguing possibilities (ex: was there more than one such outlaw by that name?) are shown in a World History Timeline documentary (48m46s), Robin Hood: The Truth Behind the Legend hosted by actor-presenter-activist Tony Robinson ("Robin's son"!), aka, Sir Anthony Robinson.

So! If you check out Robin Hood's Wikipedia bio, you'll find mention of a fellow named Robin Hod whose 'goods' were confiscated, and thus he resorted to becoming an outlaw. My guess is that taking revenge and a basic need for survival were at stake. Well, apparently the earliest mention of Mr. Hod dates back to the year 1226 and the York assizes. Could losing everything turn a person into a lawless character acting against society? Back in the 13th century, what were the options?

Of interest may be a Timeline of York which shows no events in 1236 but a biggie in 1237 when on September 25th the Treaty of York was signed between King Henry III and his brother-in-law Alexander II of Scotland. Full disclosure: according to geni dot com, via my paternal Strickland grandmother, Henry III (1207--1272) is my 24th great-grandfather, and Alexander II (The Peaceful; 1198--1249) is my 25th great-uncle. Actually, a multitude of people descend from them, even we of an American persuasion!

Please note that there are multiple candidates for the historical role of Robin Hood as noted in the documentary linked, above, but such a wide scope is beyond the limited purview of this post which focuses on Robin Hod and the year 1226. Because otherwise, this effort would turn into an e-book, not a blog post!

Cosmic Influences of the Two Solar Eclipses of 1226

Now neither of the two partial Solar Eclipses of 1226 can be the Prenatal Eclipse of Robin Hod/Hood into which he was born since he had to have been an adult in 1226 for the seizure of his possessions (including any land holdings, one assumes) to have taken place. However, the following eclipses, their Saros Series, signs, and key planets in aspect, along with their themes reveal the cosmic energies that were running in the background of society during that year. Perhaps a clue or two lurks within so return with me to 1226!

Eclipses in mystical Pisces suggest those who are nearing the highest level of spiritual attainment as long as Piscean illusions do not blind them or lead them into spiritual escapism. (Yes, such escapism may have been a feature of the 13th century - see the Paganism video linked, below) and a Pisces Eclipse would have amped up or focused such tendencies toward the delirious side for those susceptible to its influence.) Having the as-yet-undiscovered planet Pluto in opposition denotes higher spiritual attainment, as noted, or a slide into animalism. Could such debasement of character have influenced Robin Hod once he'd lost his possessions so that he turned scofflaw? Did 'Robin' begin robbing?

Here are the themes of all 3 North Eclipses for your consideration in relation to our subject for a 3 North manifested in 1226 and its initial eclipse occurred on October 10, 991 @22Gem06: 'News involving a young person or that transforms a situation; an over-excessive series with news that causes worry and obsession; fulfilling large plans is a positive reaction as long as people don't carried away'. (Note that 3 North @00Cancer is the Prenatal Eclipse series of the 9/11/01 attacks; the last 3 North Eclipse occurred on July 2, 2019 @11Cancer, betwixt America's 1776 planets in Cancer.)

Then on August 24, 1226 came a partial 3 South Eclipse @7Vir47 conjunct Venus in Virgo. As you know, Mercurial Virgo is the sign of health, work, analysis, categorizing, criticism, and relates to goddess worship as does planet Venus with 13th century paganism not to be discounted. To our modern sensibilities, an eclipse conjunct Venus brings in potentials for materialism, the value of items, beautiful possessions, plus, issues of dedication (taxes for a King's coffers?), discernment, and a strong sense of duty. Karmic ties with family members such as aunts or uncles are also suggested (R. Lineman).

The initial 3 South eclipse perfected @27Leo10 on August 13, 1208 (then came 3 South's second manifestation in 1226!) conjunct Mercury Rx which suggests the importance of logic and mental dexterity if karmic progress is to be made. One prominent factor with this 3 South manifestation is that the Eclipse arose that day in 1226 with fixed star Denebola and I think the star's key phrases apply: "to go against society" and "against the mainstream". As you know, eclipses that conjunct fixed stars are particularly strong. Turning outlaw, for whatever reason, could be certainly described by Denebola's implications. And could emotional trauma be part of the picture? Well...

'Sudden endings of relationships, possibly with a younger person; with Pluto involved (@10Leo15 conjunct the karmic Nodal Axis) there's a deep emotional component and a sense of traumatic transformation which comes through news received or short journeys undertaken'. Notably, 3 South is the series of a Solar Eclipse I've previously termed The Covid Eclipse of 2019 with its influences going into 2020. The post displays the Horoscope of the initial 3 South of 1208 and links to my post concerning the December 26, 2019 3 South Eclipse @4Capricorn which brought society the "traumatic transformation" caused by the introduction and continuation of the Covid-19 virus.

And of course, all eclipses are known as "cosmic blinks" from Above, or as "wild cards of the Universe" for in similar fashion to planet Uranus, they tend to disrupt earthly events and often reveal what's previously been hidden. Why, complete changes of direction may result!