Say Hello to Siegfried I, Count of Luxembourg! 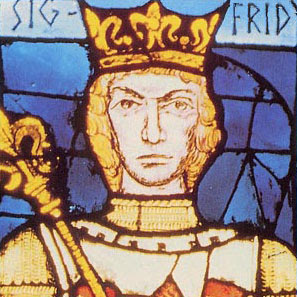 Don't Let His Scowl Fool Ya - He's Happy To Meet Anyone At All These Days!

Well, it's Thanks once again to my paternal Strickland grandmother, for I find that Siegfried I, Count of Luxembourg, is my 30th great-grandfather. Not close enough to do me or mine any harm but there he is way back in the family 'woodpile' all the same! On Wikipedia, he is known as Sigfried, Count of the Ardennes, another of his titles, and we should note that Siegfried was a 6th-generation descendant of the much-lauded Charlemagne , my 35th great-grandfather. A hoary bunch, aren't they? Well, I'm growing somewhat gray around the muzzle myself these days!

Now as you know, Charlemagne is aka, Carolus 'Magnus', Rex Francorum and Imperator Romanum (April 2, 747--January 28, 814). And from his title we can deduce that he was a very busy ruler with a lot on his plate, as we say today. But so was our Siegfried who, around year 950, married Hedwig of Nordgau, a Saxon lady though apparently nothing is known of her parentage which makes Hedwig one of my mystery grandmamas! Because when you venture this far back into ancient family lineages you're bound to find a few mysterious relatives of which little is known. And annoyingly, they're usually of the feminine persuasion.

Meanwhile, here's the geni dot com bio page of Siegfried I if you wish to view his family members including his parental units and Hedwig. (You won't find me there because I'm not signed in to geni at the moment.)

A Bit of Astrology for Siegfried I

As for Siegfried's personality blend of conscious and unconscious energies, that's revealed by his Sun Leo-Moon Aries combo, with Moon in Mars-ruled Aries for the 24-hour period of his birthdate (August 15, 922, as noted). This energetic double Fire blend reveals a man of adventure, courage, and self-dramatization. Add to this a self-centered nature yet with a social conscience, powers of persuasion, and tendencies toward recklessness, unconventionality, grandiosity, and vanity.

He may have been prone to hero-worship so a mentor that he looked up to and emulated may have been part of his life, at least during his early years. And he probably tended to over-estimate himself as double Fire personalities sometimes do. Maybe he used the 'no risk, no gain' way of accomplishing things.

And so in closing, perhaps the "Image for Integration" (of conscious and unconscious energies - combine for best results) provided by the Harveys for the Sun Leo-Moon Aries blend describes something about Siegfried I, Count of Luxembourg. See what you think:

"A knight errant dedicates his next grand adventure to the mistress of his heart, and then rides off into the sunset in a cloud of dust." (Sun Sign-Moon Sign, by Charles and Suzi Harvey #ad). This sounds about right for an super-charged 10th-century ruler to me, how about you?

So there's your astro-introduction to Siegfried I, Count of Luxembourg. If you're on friendly terms with him already, then kudos to you, and if not, Thanks for taking this meander down Luxembourg Lane with me and one of my very ancient great-granddads!