Astrology of a Tragedy in Moscow, Idaho

Admittedly, it's rare that I publish tragic horoscopes of death while a murder investigation is ongoing and, preferring Forensic Astrology of cold cases instead, I waver over doing it now. But my heart is broken over this tragedy, and with the perpetrator/s on the loose, I've decided to share two horoscopes showing the time frame that Moscow, Idaho's police chief, James Fry, has publicly stated as the hour during which the brutal murders of four college students (University of Idaho) were knifed at home in their beds during the early morning of November 13, 2022 (3:00 am to 4:00 am PST). Two of the victims may show defensive wounds but this is not verified, as far as I know. Yet if true, this may indicate that not all of the four were asleep when attacked. 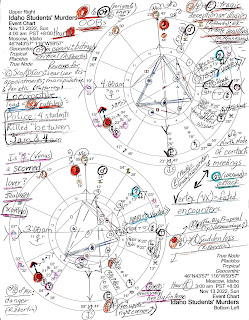 Please enlarge and/or print the image for clearer reading if you wish for many notes are penned on and not all will be mentioned in the following text.

Astrological Potentials: As Above, So Below

As you see, Venus rules both Libra Ascendants so suggestions of revenge for romantic disapointment, being scorned, and jealousy may to be involved. Knife-wielding Mars is out-of-bounds, perigee (very close to Earth - and angry), and in two-faced Gemini, can be bitingly critical. Plus, being retrograde ('Rx') is a frustrating condition for ready-for-action Mars. On another level, Mars can signify Police Chief James Fry who has expressed frustration.

Now Luna in Cancer is also out-of-bounds ('OOBs') so a measure of emotional estrangement is expectable with subjectivism, self-protectionism, and emotional difficulties suggested with the Moon strong in its own sign.

Then as you see, at 4:00 am, assassin Pluto, the primally violent dealer of death, nears the End Point ('IC'), which is also the 4th cusp of Home and Domestic Scene. Actually, invisible Pluto has been 'in the house' for some time - was he waiting for his target/s to return? The four students are known to have returned home - two at about 1:45 am, and two at about 1:56 am (consult the Timeline, linked above for more details). Horoscopes set for those earlier times would be informative as well but are not published in this post.

Other potentials found in the 3:00 am and 4:00 am charts include a possibility that the perpetrator was someone from the students' past, someone unstable and choosing death as their revenge for past slights or hurts, possibly romantic in nature (see Sun Scorpio-Moon Cancer notes, upper left). Then as you see, the Scorpio Sun leads a Locomotive shape of planets indicating someone ruthlessly determined upon success.

were jealousy, betrayal, and revenge (Scorpio) due to educational competition or a grudge of some sort? Alcohol, and perhaps other drugs, can be seen with the Jupiter-Neptune Conjunction in Pisces (6th house of Daily Rounds), a planetary pair that tends to include delusion, big dreams, and/or unfulfilled wishes. This may relate to the fact that two of the victims, the dating couple, visited the Sigma Chi fraternity house prior to the their deaths, returning home at about 1:45 am, and as you know, many frat houses are notorious nests of drinking and partying. Just sayin', not accusing Sigma Chi which is known as a social and literary organization, founded in 1855.

So another factor I'll mention is in the 4:00 am chart with its 8th cusp of Death, Sex, and Shared Resources, conjoined by the radical, often political Uranus-North-Node ('NN') pairing which suggests on a basic level, meeting (NN) a sudden attack or attacker (Uranus), plus - and this is why I favor the 4:00 am chart - North Node is precisely conjunct the Vertex ('VX') at 4:00 am, a point of fated encounters (and sometimes, of unfulfilled wishes which are also part of the dreamy Jupiter-Neptune picture).

Now it could be significant that racism and/or religious persecution are involved with this tragedy, but this is beyond the scope of this post. However, if this turns out to be involved, the Uranus-NN pair conjunct 8th cusp should receive more scrutiny for its political implications, especially considering the particular atmosphere now embroiling US society with transit Neptune in Pisces opposing US Neptune in Virgo activating generational clashes of ideologies and cruel persecutions which the Collective now must deal with. Plus, America's first-ever Pluto Return (since 1776) is bringing life-or-death circumstances and conditions with deathly energies running in the background of many events. And with Pluto in Saturn-ruled Capricorn, those with the urge to control (like hardhearted dictators) are feeling their anti-humanity oats and acting out against civilized society in whatever ways their malicious brains can devise.

Now it's obvious that the daily rounds of the students are key to figuring out the guilty party with Daily Rounds represented by the 6th house. A military, police, or other connection to service occupations or industries are hinted at, although I've heard of no suspicions of this nature as of yet. So this could simply signify the necessary involvement of police investigators with the crime, even the FBI.

And naturally, we must hope that the murderer's DNA and other forensic evidence will tell the tale no matter how long it takes!

So in closing: may the four students' family members, their friends and other students soon find a measure of justice and relief which will come when the perpetrator is apprehended, indicted, tried, convicted, and sentenced.